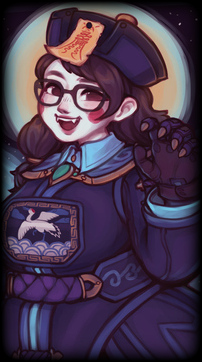 Slow day at the office, nothing really to do necessarily expect to actually look busy filing paperwork. Honestly she never got why they gave high ranking shinobi so much paperwork anyway, shouldn't they really have assistants helping her with this? Regardless she wasn't complaining, Midori just simply took this time to use one of those therapeutic coloring pages to help reduce stress and anxiety. On this page was a great bat with a rather elegant design on the creature making it look more like a work of art with all the shapes and many patterns on the creature. Midori proceeded to fill the creature of the night in with vibrant colors as she began singing to herself, some lullaby her parents used to sing to her which was both funny and relaxing at the same time. The song went something like;


"♪ In zuch a buzy day time can get avay, und life could bass you by. Nein time to eat or get off your feet, you may feel like vu may cry. Und it feels zo long zince I schtarded zis zong, I'm going crasy und I don't know vhy.

It's 3PM I've had lunch. Und I had enough of it

Then when the song was over, the jiangshi stopped coloring then reached down to the side of her desk to pick up a large gord filled to the brim with chocolate syrup feeling very happy now. "♪Und zen I had chocolate, delicious chocolate. Und zen efferyzing's fine! she finished her song then proceeded to pull off the quark to the chocolate syrup and proceed to take huge gulps from the gord feeling it starting to get a bit lighter as she drank from it. Once she had her fill, she set the gord back down to its proper place, licking her lips clean and starting to actually look at the paperwork for a patient that she was monitoring. Yawning to herself as she looked through the patient's diagnosis.

Minikui was happy to have met Miss Fudotta. The thought of being mentored by her excited her and she found herself exploring the medical branches section of the village. Curious about the vampire she made her way towards the Sennin's office and headed towards the door that was a bit cracked open. As she was about to open it and announce herself she heard singing from the office and decided to listen to the Sennin sing. It was an interesting song one she had never heard.

Once the song was over she could hear huge gulping sounds coming from within and waited outside patiently until it died down where a small yawn was heard escaping the sennin. She wondered if she sennin had a normal sleep schedule or if she was more of a night owl. After all she was a vampire and hadn't exactly expressed any way or the other in the conversations they have had. Brushing the thought aside she knocked on the door to announce her presence and awaited for a response. "Hello Miss Fudotta. It's Minikui mind if I come in?"

While Midori was reading through the document, she heard something rapping at her office door along with the familiar voice of Minikui. "Vu may enter my schtudy freely as vu vish young one. I haffe been expecting your combany." the jiangshi replied sweetly, placing the paper down so she could tend to her guest. Midori's study consisted of dark wooden floors, the walls painted citrine yellow, and some potted purple orchids by the windows that had the curtains drawn so the sunlight wasn't much of an issue but the room itself seemed darker due to the colors of the curtains being dark. The wall behind the large desk was covered in bookshelves and books previous sennin's have collected during their careers. In front of the desk are two large leather couches and an ornate mahogany coffee table, all standing upon a green carpet, in the event that she’d need to call a meeting. To the left of Midori's desk are five filing cabinets, all with five drawers, as well as a cabinet with medical supplies.

"Velcome, dear Mini. Pleaze get comfordaple und tell me how are you feeling today. I am in zee mood for hearing zome goodnews zat isn't mein ovn." she gestured to the seats, allowing Minikui to take her pick of whether she wanted to sit in one of the comfy couches or the empty seat that sat across the vampires desk. Once Minikui was comfortable, Midori looked around at her office feeling like maybe she should've done a little more fixing up to the place before inviting someone here. Like the walls would look so much better with large paintings of long dead Medical sennin's, also a marble head statue of herself would make the place look more better, and crimson red walls instead of yellow. But of course, was her work so how the office looked didn't really matter. Besides she hasn't even redecorated her own ruin yet.

Now paying attention to her guest, she decided to offer up a little hospitality to the young girl. "Do vu need anyzing? Zomezing to eat or drink? I have zome more chocolate zyrup around here." she is offered the young child, looking around her to see if she could find where on earth she placed that huge jug of syrup. Once she found it, she lifted it up off the floor then set it on her desk. The sweet smell of it hitting her nostrils making her want to drink from it again.
You must log in or register to reply here.
Share:
Twitter Reddit Tumblr WhatsApp Email Share Link
Top Bottom