How had this escaped my attention? [Learning Fiero] 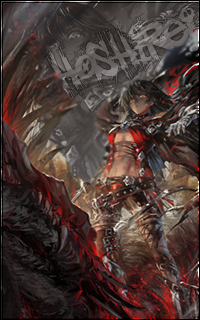 Hoshirei had not been to the library in quite some time. How long had it been exactly? It had to be at minimum a year. As of late, if she needed to research something, she took herself to her clan's library or dug through papers in her new office. This time, however, she needed to come to the village library. She really needed to brush up on her cyphers. She had run across a few papers in full Al Bhed, and while she could eek out some words just because of her own cryptography training, most of it was gibberish. Normally, Hoshirei would just sit down and hammer away at the puzzle for a few hours before finding a pattern and solving it, but she really needed to read the papers in a much shorter amount of time.

She had somehow persuaded Kayo to stay home, or at least outside the library for now. It would not do to have the librarian frustrated at her for bringing in her summon, though would the librarian get annoyed? The Inuzuka bring their companions into the library, don't they? Shaking her head with tiny movements, Hoshirei found herself at the section where the Al Bhed learning compendiums were located. She pulled down a few books and lugged them over to a nearby table.

She read through a couple of the books, mostly looking for the cypher's codex, but mentally completing a few of the exercises. Once she felt comfortable enough, she pulled out the paper from earlier. She stared before pulling out a pen and beginning to translate. The original read: Luhknydimydeuhc, oui yna dra milgo fehhan uv y mevadesa cibbmo uv yen! and farther down the page in very small writing read Y vneahtmo haekrpunruut dnelgcdan. Once she was finished writing, she whispered out loud to herself the translation, "'Congratulations, you are the lucky winner of a lifetime supply of air.' Signed: 'A friendly neighborhood prankster.'"

Her hands clenched, followed by her jaw, and then she rolled her shoulders in an attempt to ignore her quickly growing frustration. Unfortunately, another glance at the paper to confirm what she just read caused the dam to break. "Are you fucking kidding me?!" she exclaimed loudly. As soon as it left her mouth, Hoshirei stiffened looked around for other people. Seeing no one, she sighed softly and berated herself, "Really need to set a good example. At least this is the first time I've ever done that here?" Someone behind her cleared their throat. Hoshirei turned around with a sheepish look on her face to see the librarian. "If it wasn't the first time, I'd be doing more than asking you to keep it down," said the librarian with a chiding look on their face.