Basuta is 6'2" and appears to be of European descent. He has reddish-brown hair and his muscle mass is built just a bit more than a combative-sports athlete. When visible, his arms and legs show scarring. Medical professionals might conclude due to there placement that they are evidence of a bone lengthening procedure.

Nowadays, one will never see him lack in a sense of style because public appearance in deeply important to him(Just ask, he will be happy to tell you). But in any environment he will always be sporting some form of eyewear that will shied the true color of his eyes, so much so that even his acquaintance has wondered if he still has eyes.

Welcome all peoples, to Basuta’s Smash-ability List where we review all the hot and even so of the not so hot chicks I have come across to discuss who are best Bae’s out there. Let talk SMV, Sexual Marketplace Value. 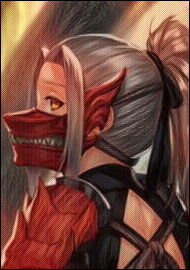 So, in today’s day and age one can’t get enough of a chick who knows how to dish out a little pain when it comes to the fisticuffs. Just kidding, when it comes to girls who can fight you’ll find plenty of them around here. But not every day can you find one that is particularly good at what she does and enjoys doing it. Many have no problem hitting folks, but this chick was willin' to solo ya boy toe-to-toe. Having the confidence to take on a man in a solo match, there’s no wonder why your boy had to add her man I tell you. Yes and she can wear that armor like nobody can na' mean, ain't nothin' wrong with showin' a little skin. So she seems like the type able to give one type of punishment and can take another type. And I'll give a point for amber eyes too, definitely an unusual color.

Buuuuut that scores' gotta take a hit for the grey hair na' mean. Don't get me wrong now, I love a mystery as much as anyone and I can get down with an older woman. In fact, I hardly care about the numerical age of an older woman, so long as they don't look like they lived too hard, you know. With that said, I wouldn't want to get her under covers only to find out this chick's armor is meant to hide the features of a 60+year-old you know? Still, probably wouldn't say no though, just wouldn't prefer it. But yeah, I would have to get a view of her again outside of that armor before I can give a better rating. Until then...

Each rating is subject to change...

Introductions to the boss bae. She's the Medical Sennin, but even so,... I'm pretty sure they're a lot of peoples out there that have had a little workplace romance/shenanigans. There's a certain type of thrill chasin' someone who is supposed to be above your station if you know what I mean. And it's kinda nice to have something like an eye-candy kind of boss who doesn't quite know how attractive she is at times. She's actually kinda cute when she's a little peeved and feeling sassy. That's why I don't mind annoying her from time to time, so I can see her do her angry sashay when she walks away. Anywho, her bust size isn't anything to write home about, but her waist and,... shall we say posterior are fabulous.

Now she's a nice looker naturally, I mean she seems like she 100% authentic on the physical but the monk garbs she likes to wear says she doesn't have much of a fashion sense at all. Day after day she takes a pretty freakin' nice body and covers it in the drabbest clothing one can imagine as far as I know. Monks clothes all the time, that spells very disciplined(By the way, actually a very good thing, just not hot in and of itself.), which we can equal to boring and predictable so I can't imagine her having much of an adventurous or wild side. Work is all I see her do so it's likely that medical work and training are about all she knows and all she'll likely talk about.

Smach-ability Score: 8/10 +Exceptional waistline, +Seemingly all natural beauty, -Comes off as a bit of a bore
Assessment: Office fling most definity preferred, marriage material(if I were the type, but I'm not, not yet at least)​
Subject to change...
You must log in or register to reply here.
Share:
Twitter Reddit Tumblr WhatsApp Email Link
Top Bottom