Off the coast of Soon's Harbor, away from the hustle and bustle of the trading port and shipyard, along a jagged coast of rocks and harsh battering waves, would stand a figure clad in armor. Surrounding the figure would be the chattering of the Unbent known as The Swarm.

"What are you waiting for... go bring me my prize!"

The Unbent would let out a morbid howl as they would begin to rush forward along the jagged coast and go careening off into the water of the sea before them. Their glowing eyes, burning with chakra, could be seen as they made their initial dissent before finally disappearing into the vastness of the deep before them.

The words would slide from out of the helmet of the armored figure. The voice would be monstrous, like an animal had learned to speak the language of humans, but would also be feminine. This figure would be one that was held in high regard by Dominus within the First Children, as she was his current proxy while he was preparing. She was given a task, just as the rest of the First Children, to scour the land for a sacrifice. While others took to whatever prey they could find, she would be one of the few that had a specific prey in mind. She just needed to corner it first.

Another round of spastic moving Unbent would begin to plunge into the water and down into the depths. What was she looking for within the deep? What would be the purpose of these sacrifices...what more was happening during this calm. 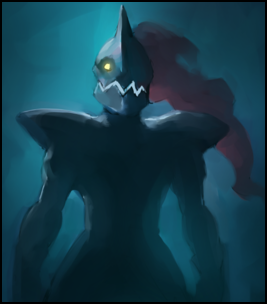