[pvt] A family meeting up

Pencil was scraping over the paper... Another line was made... And one other was carefully erased. Kotori had picked up her hobby again of drawing in her free time... and right now she had been drawing for a small while. Humming she started to move her body from left to right. It was a silent day for a change for the small girl, she wasn't even bothering to train today which was her most time-consuming thing, training in the backyard near the Sakura tree back in the Uchiha household. "Hmmm..." Was a small hum leaving the child as she placed the back of the pencil to her lips? 'What now...' Was her thought as she looked at the drawing, the empty street which was before her... It looked so empty in her own thoughts... so with that, she closed her sketchbook, placed the pencil in with it and started to roam around a little.
She was dressed in her usual Uchiha attire and slowly started to shift her head around a corner Market... bingo. She quickly walked to there and bought a piece of Watermelon that she started to eat up and leaving the scale to dry in the sun next to her. "I might make use of that later..." She muttered and started to curl up her knees and watch others passing by.

Today was a.. rare dare for Maikeru. It was a day off, a treasured, sacred day that most shinobi, let alone academy students, did not have. He had decided to sleep in, enjoying the simple act of the sun being up before he was. As the day waned on, and it reached lunch time, he looked at his wallet. It was bulging a bit, fatter from the fact that he had little to no time to spend the little money he had earned. With a smile, he grabbed it, and began to rush to his favorite udon shop, practically drooling at the thought of the warm meal. 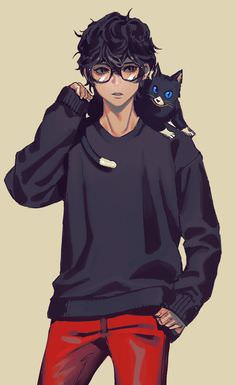 As he walked, anticipation in every step, he saw a familiar face. The girl, who was sitting on the side of the road, seemingly lost in thought, was Kotori, the Hokage and Clan leaders daughter. As he approached the girl, he stuck a hand into his pocket, looking down at her with confusion and questions in his eyes. He was surprised she wasn't with a body guard, though, there were probably quite a few ANBU hidden around her he imagined. Giving her a soft smile, he held out a hand to her.

"Hey there, Kotori. You probably don't know me, but, I'm a clansmen of yours. Maikeru." He was pleasant in the way he spoke, keeping his voice light and positive. Like he was talking to a normal child, and not a four foot killing machine. "Why are ya sitting out here all alone on such a beautiful day, that seems just wrong. I was gonna get some udon, would you like Aniki to treat you to some? A growing girl like you can't afford to skip a meal." Asuka clinched her teeth as she got out of the Uchiha household, she had locked all over the place and Kotori was nowhere to be fun. Her quick steps made people that were coming towards her move away, her eyes had rage in them. "I swear... when I find that Brat I'm going to give her a piece of my mind." Her hands turned into fists, her eyes turned into her Eternal Mangekyou. Asuka teleported around Konoha, trying to find her Little Sitster. Where the hell could she have gone?


That was a while ago.


Thankfully, she had gotten a tip of where she was thanks to the Guard at the gates... after death threats where issued. No she found herself in tea, Asuka had punched a merchant that had yelled at her for not being careful. She wasn't happy... none at all. She kept mumbling angry profanities to herself while walking towards the town. How dare she come all the way here? She knows she has to tell her Big Sister where she's going. Especially if she left the village. After another while of searching she finally saw her, sitting down with a watermelon scale.

With a clinched teeth Asuka teleported right in front of her. Giving her quite a head chop. Not enough to cause huge amounts of pain, but enough for it to be uncomfortable. "BRAT!" Asuka yelled out, folding her arms. "How... many times have I told you... to LET ME KNOW where YOU'RE going?!" She was angry, it had almost given her a heart attack when she found out she was gone. "You know perfectly well I trust your strength and you. But don't you think a "OH, forgot to say Sis. I'm going to Tea." would be nice!" She went on a rant, pacing back and forth "What if you were in trouble and I never knew?" She asked looking at her now with worry in her eyes, the anger was still there though. "You know Sensei and Hokage-sama are busy so you have to tell me." She looked down at her with a sigh "I'm the one that's supposed to take care of you."

"Hey there, Kotori. You probably don't know me, but, I'm a clansman of yours. Maikeru." Indeed... Kotori was thinking for a moment before she would lean in the palm of her hands... Slowly tilting her head. He wasn't living in the main building in her mind or rather idea... so she started to smile. "well... It is always fun to meet something new!" She would snicker and throw her hands up in the air. "Why are ya sitting out here all alone on such a beautiful day, that seems just wrong. I was gonna get some udon, would you like Aniki to treat you to some? A growing girl like you can't afford to skip a meal."

Kotori would nod a time or two, grinning seconds later and putting up a thinking face... "Well... I wasn't supposed to talk to strangers... but...!" She said and took a small moment to place her tongue out in a little teasing way. "Since you introduced yourself, I think it would be fair and square." She snickered at her own little 'mischief; joke'. Stretching for a little moment and standing up straight. "Alright... But I won't let you pay all for it... I have... 3 yen on me..." She muttered after she had grabbed in her pockets for a little bit of money.