The Story of Our Time [Kiran] 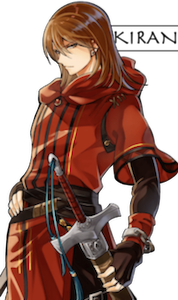 The great library was the perfect place to escape the mundane life for now. Although work as a chuunin wasn't taxing, at least for someone like him, Kiran always wondered if the assignments given to him differed from others due to his origins. True enough, he had only joined Kumogakure not too long ago, and while he may have made enough of an impression to the branch, no absences and on time reporting, he was still an outsider. And that was the ordinary life compared to what he truly sought for. For months now, he had been going through shelves in the great archives, looking for any leads about his clan. Well, it was his mother’s clan and by extension, it was his as well. But the difference was that while his mother may have left them behind and tried her best not to influence him, he felt their spirits beckoning to him and so he resolved to find the answer for himself.

But would he really be able to find any leads to the Inuzuka Clan that lived in Kumogakure in the past?

Entering through the main doors of the library, he bowed politely to the receptionist as he dropped by to leave a temporary ID, which, in return he was handed a set of keys. Perhaps there were certain things that being part of the main branch was good for, such as access to certain areas in this vast collection that would otherwise not have been possible for the mere passerby. It was located on the second floor, past the shelves that held records for the academy graduates and such. It was a good area to start for common retracing of people, but he didn’t think that just behind them, through the double-door that oddly cut-off the section from the rest of the library’s main hall, that a far larger collection of records stood.

The turning of the key resounded with a clear echo and the moment he pushed past the open doors, he caught sight of a few of the patrons inside quickly glancing up at him. It wasn’t something to be alarmed with. A few people wearing masks, though not ANBU, perhaps that medical division that handled extraordinary affairs, who were seated by the long table near the entrance with books filling their day’s attention. And then, there were others who wore relatively normal clothes, perhaps Jounins who were busy in their own right to be reading into tomes, not books… TOMES!!!

Karin, closed the door behind as quietly as he could, not wanting to disturb the people about him. He heard the small click of an auto-lock as he did so. Tucking the key into his pocket, he moved across the floor, towards the center of this closed-off section and found another receptionist’s area, a circular space in the middle of it all. He signed in on the visitor’s list, listened to a bit of her instructions of proper handling, and was then off on his own. He quickly went to go look for records of ancient clans, to start from the very beginning, hoping it would help him find what he was looking for.