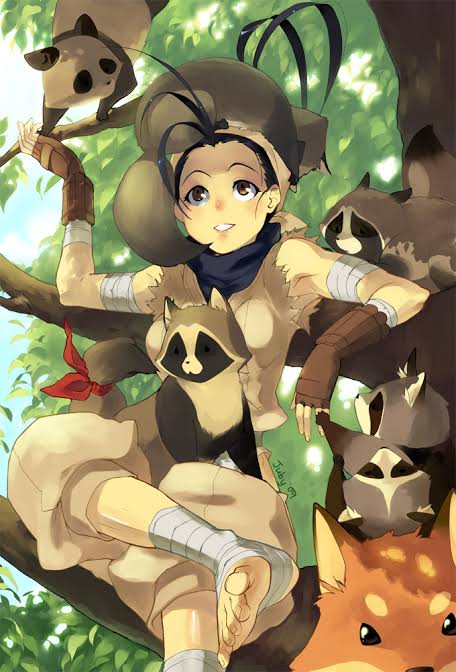 Kiko's eyes are naturally a light yellow, very similar, though lighter in shade to her mothers distinctive yellow eyes. Her Mangekyo Sharingan manifest as three teardrop Tomoe encircling her pupil. Whilst active her pupil ceases to expand and contract, nor do her Sharingan rotate as some of the Uchiha clan manifest, instead her iris' remain completely stationary.

Her eyelashes are naturally long though often enhanced by mascara. Her eyebrows are sculpted professionally. Kiko will almost never be seen without a full face of makeup and outfit-complimenting lipstick.

Kiko is of a fair complexion, with blemish free skin (medical jutsu work miracles on pimples after all...). She has a slim physique with no well defined muscles. She has deep black, straight hair that sits down to her L4 Vertebra when not up. Her hair is very well kept and polished, never messy for long. It is maintained and washed regularly even whilst traveling.

Kiko's public wardrobe consists almost exclusively of well tailored, professional attire. Most items are a shade of red or have red elements as she considers the colour her personal (though unoriginal) signature. Her Kunoichi attire, on the other hand, resembles hessian, though made from a specialised, super strong fabric weave of Hachiachi Spider Silk and a Myakashi designed carbon-nanofiber thread, allowing for almost silent movement and surprisingly effective camouflage.

Character's Mental Description: Kiko is an intelligent young woman, quickly comprehending the complexities of most subjects with a ravenous speed, her favourite subjects being 'human anatomy' and 'applied chakra bio-chemistry' currently.
Despite the fact that she is a trained Kunoichi Assassin, Kiko does not feel hatred towards any living thing, seeing every creature as a unique and complex specimen which she desires to study and understand... Unfortunately for the focus of her attention, sometimes dissection may be required before her curiosity can be satisfied.
She has a highly strategic and calculating brain, able to remove emotional impulse from her decision making if it would be strategically advantageous to do so, though she normally enjoys the full range of human emotions. Whether this skill is due to nature or nurture is up for conjecture.

Multiple Personality Application: Nope, she might have mental problems but possession of multiple personalities is not on the list.

Character History:
Kiko was born the 'youngest' of three healthy triplets, two boys and a girl. Her early childhood may have been an unusual one to the general population, as it was Myakashi tradition to start training in the shinobi arts almost before a child could talk. Their training was unique in the fact that it was overseen by two of the masters of the Myakashi, who also happened to be both of her genetic grandfathers.

Her mother was of a 'lessor' Uchiha bloodline, unacknowledged by the Uchiha Clan at large due to its 'mixed blood'. Despite the thinness of the Uchiha blood running through her veins, Kiko had inherited much of the bloodlines legacy.

Due to her inherited natural gifts, well ordered mind and constant pursuit on the path of the Kunoichi, her clan considered her a full fledged shinobi by the young age of fourteen, ready for independent field operations.

For four years, Kiko ran covert mercenary operations on behalf of the Myakashi Clan and its employers. After yet another clash with Konoha forces the Myakashi Clan entered into a state of high alert, Kiko and her brothers being recalled to Myakashi HQ as a consequence.

Whilst there, her siblings and herself were put through a series of deadly trials and examinations culminating in the execution/suicide of their genetic mother. With the perpetual physical and mental strain followed by the shock of their mothers unexpected death, something in Kiko's mind had awakened (or broken?) and her Mengekyo Sharingan took on a whole new form. That of the Eternal Mengekyo Sharingan.

Now with her new powere Kiko has been sent once more into the world of the shinobi. Her only standing command, to remain alive.

Left to her own devices Kiko now seeks knowledge. Knowledge of her genetic heritage as well as the world around her. She is eager to see what this world has to offer.
Bloodline: Sun Storm Uchiha, Eternal Mangekyo Sharingan


Name of any Contract you currently own:
Tsukomogami
Deep Sea

300 Advanced Shop Points to carry over a Deep Sea contract.

When her grandfather fell in Konoha from the betrayal of his tsukomogami doll as well as the skill of the Leaf Shinobi the Goddess of Dark Waters turned away from her champion in despair. The Goddess of the dark waters withdrew her blessing from the old man at that moment, having failed to even call for her aid in his hour of need, instead relying on 'lessor' other worldly powers. But the Goddess' pact with the Hirato bloodline was still there and the Goddess required her champion.

Her first champion, Yong Jr, lay in an induced coma as he recovered from a brain injury inflicted by a Sennin of Konoha. His replacement, her champions father, also fallen at the hands of a Sennin of Konoha... The Goddess could see a trend here, and it was a disturbing one.

She revealed herself to the next strongest member of the remaining bloodline, a young girl named Kiko, daughter to the champion of the Goddess. When she revealed herself to the young woman, the two discussed many things, but mostly of the pact made between the Goddess and the girl's forefathers. She told her that of she chose to take the responsibility she would be the Goddess' new champion, at least until her father was returned to his true self once more.

The Goddess' final words for her new, young champion were words of warning. A warning to quench this fire between Konoha and the Myakashi clan, it would bring only more wasteful death...

Name of Kinjutsu you own:
Old Chimera
New EMS

Still actively roleplaying in any other threads?
https://www.ninpocho.com/viewtopic.php?f=756&t=62217&start=15

Approval to use Migoya from me.

In case it needs it, I grant approval to use Doku.

Can Kiko be an npc?
Edit: I meant none of that... Kiko please

Taken to Leaf Council for approval of history.

Requested contract team to have a look too

Hisao told me to post this here as I seem to have been to vague in my references.

This is the event I was referring to as well as the following ‘run’.

Myakashi is the clan I was making reference to just for clarification sake.

After Discussing with an admin (aka Enzan) Due to the RP incident being character actions which you were a part of, we don't need to wait for Leaf's Approval.

OCR approved. Name swap/banner will be done soon. Moving topics shortly too.... Edit: And by that I mean I have put up the Enzan signal as I appear to not have the ability to do any of this.