A drink to filler up x Hissori 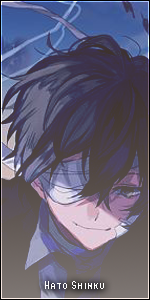 Shion was done with working, and as he was done he started to walk towards his regular place. Everyone from his group knew that some other groups knew that. But it was a neutral bar for them, so he didn't really mind it otherwise. It was one of the older bars around, you could see almost the history where it had been in. Lots of places inside the bar had often been re-decorated or fixed up.
Shion sat down on one of the bar seats and got his regular cappuccino. He wasn't drinking right now, maybe later or maybe not at all. He could easily drink a few under for a few yen or information. At least that was a thought he was having as he looked around the place. "At least I don't have to babysit today..." He softly commented before he would drink his cappuccino.

"Hej Revenu ĉi tien! Ĉu vi ne scias, ke mi estis Kage?” A drunk man at the corner of the bar slurred at as the bartender handed him a glass of water and walked away. Hissori had to have been drinking for some hours at this point to have started to use his native Kirigakure tongue. Dressed in a fitted pair of medium blue pants, fasten low on his waist with a brown genuine leather belt, and then a light pink button-down shirt that had its top two buttons undone revealing a deeply tanned chest.

“A round of drinks to everyone in here! For tonight we are celebrating my newest publication!” Hissori shouted out with a rather thick island accent. This caused a rousing round of cheers from the more inebriated bar goers. The rest of the bar would roll his eyes just a bit as Hissori pulled a wad of bills from his pants pocket to show that the middle age man defiantly did have a surplus of cash to burn.

“Verŝu unu por vi tro bona sinjoro!” Hissori told the bar tender as he himself reordered himself a mixed drink of island rum collapsing back onto his seat with a heavy sigh as he rubbed his flushed face going to finish his glass of water. A bit of it spilled down the man’s cheeks and chin as he hurried to finish the water, slamming the glass back down on the bar before pushing the empty glass towards the bartender, stuffing a small bill into the glass as a tip for putting up with him.

Shion swirled the cup in his hands. Following the milk going around the rim. He was listening and watching about what was happening around him. What caught his attention the most was the person that started to say something in a forein language... the only think he could actually desciper was the word Kage... Shion looked towards the bar man who seemed to have had filled him quite a bit, as he had gotten water after all. He himself wore a casual attire, beige pants, dark brown shoes, black vest over a striped dress shirt that is light blue in hue. He wears a bolo tie, which is held by a brown ribbon and a turquoise pendant. His coat was hanging over the stool he was sitting on.

The guy mentioned something about his publication. Shion started to think: ' what kind of publication does he speak about, what would the subject be?' Now this man started to get interesting for him, mainly also because he didn't seem to be from around here.
As the other was working away his water in a haste, he himself finished up his cappuchino and he ordered a simple tea for next. He took his coat and moved closer to the man. "I heard you saying you giving away a round because of a success in your publication. Congratulations on making it this far, hope you will get further... May I ask, what is the book about? Maybe it would be interesting for me to read?" He spoke towards the other as he got the tea in front of him. "oh... pardon me, introductions... I'm Shion."
I

Hissori seemed to bask in the praise of the bar as they went up to the man to congratulate him. Hissori did not seem too phased by it, but like any dog was basking in the “good boy” attention. Most of the bar goers seemed to be getting beers, Hissori however would order another fruity island drink as he leaned back.

Leaning back in his stool, Hissori drunken emerald green eyes would look over to the approaching man. Hissori would not stop leaning back though, sliding well past the point where the man should have fallen off the stool. Instead, Hissori’s feet were planted against the bar, channeling charka into the soles of his boots to hold the man in place. His unfocused eyes would stare up at the roof as he awaited his drink to be returned from him, up until someone started to make his way towards him

“Hello.” Hissori said he glanced at Shion drunkenly grinning. Hissori would give a lazy dismissive wave at the comment about the publication. “I have lost count with how many times I’ve been published, but I was published in a journal, not a book.” Hissori drunkenly slurred out his language finally returned to something more than a dead dialect. In a sudden movement, the former shinobi would swing himself upwards as the bartender came back over to deliver his drink. Hissori would bang the bar as he righted himself and thanked the bartender. Taking a sip, the adult would tap his chin.

“This one? Um… It was old research I did on proper stabilization techniques on the high seas during surgical procedures.” Hissori slurred as he took another sloppy sip of his drink sighing happily. “What about you, what are you doing here?” He eventually asked after a moment.
You must log in or register to reply here.
Share:
Twitter Reddit Tumblr WhatsApp Email Link
Top Bottom