Map of Bear and Marsh: 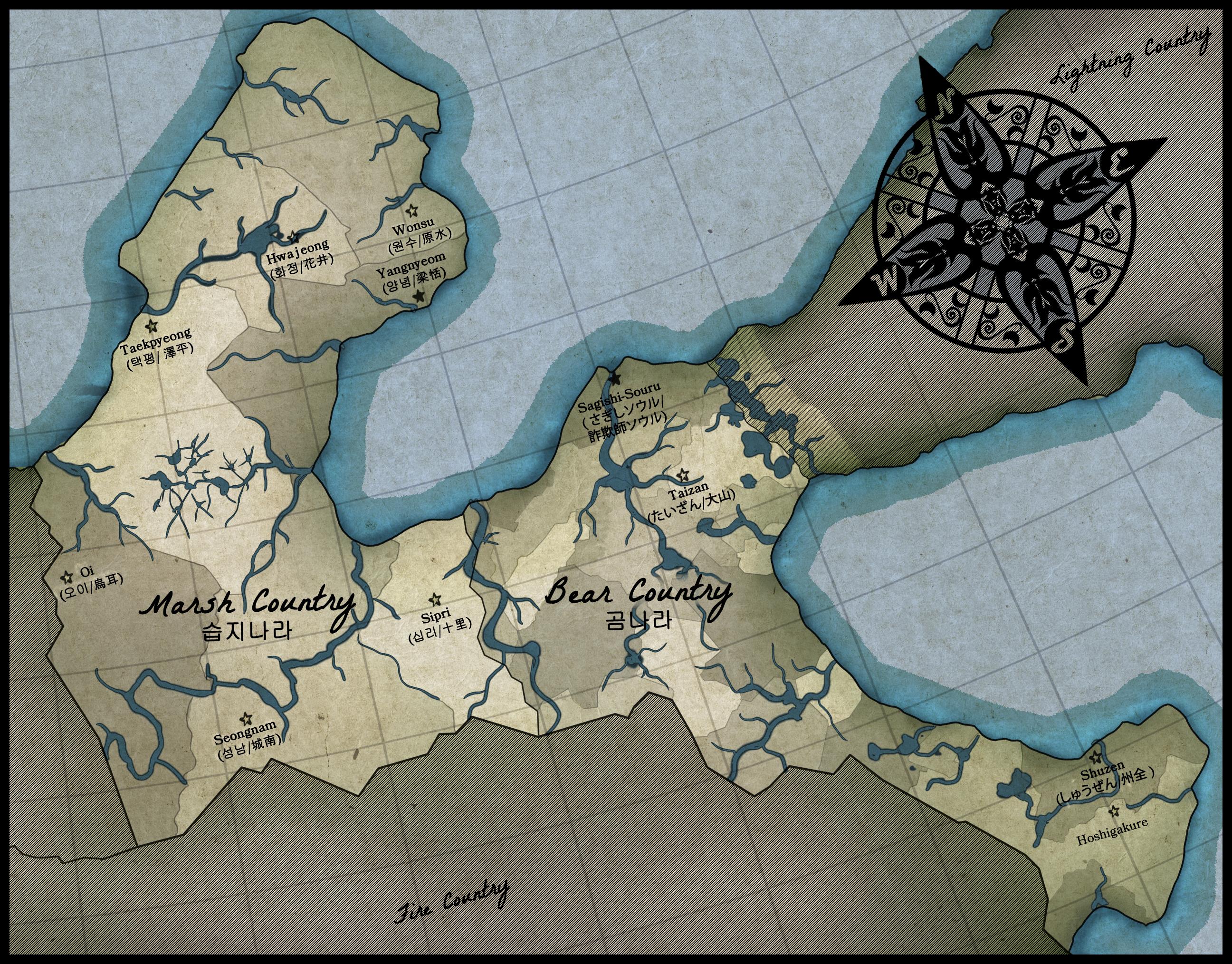 Waterfall and the country divide: 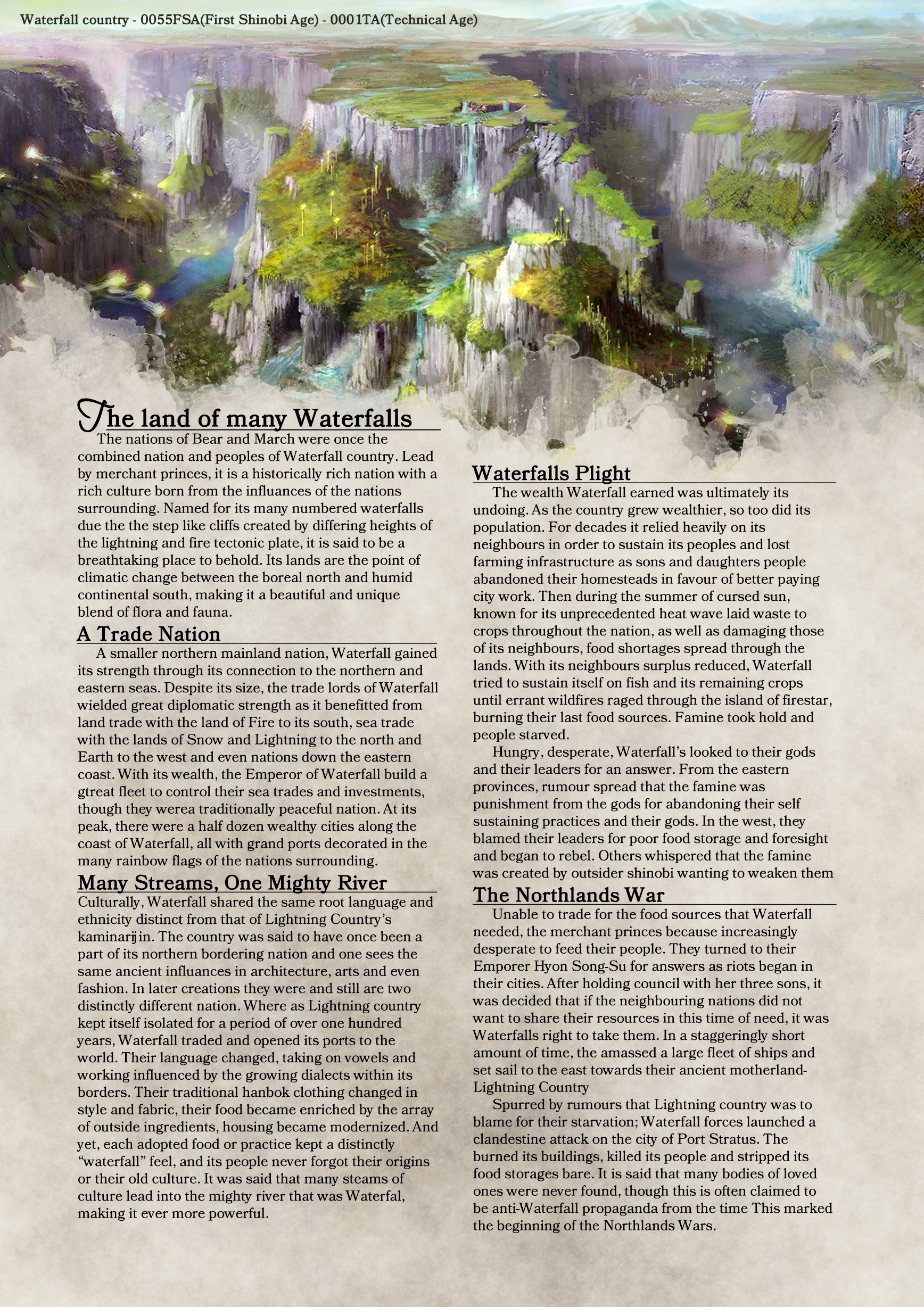 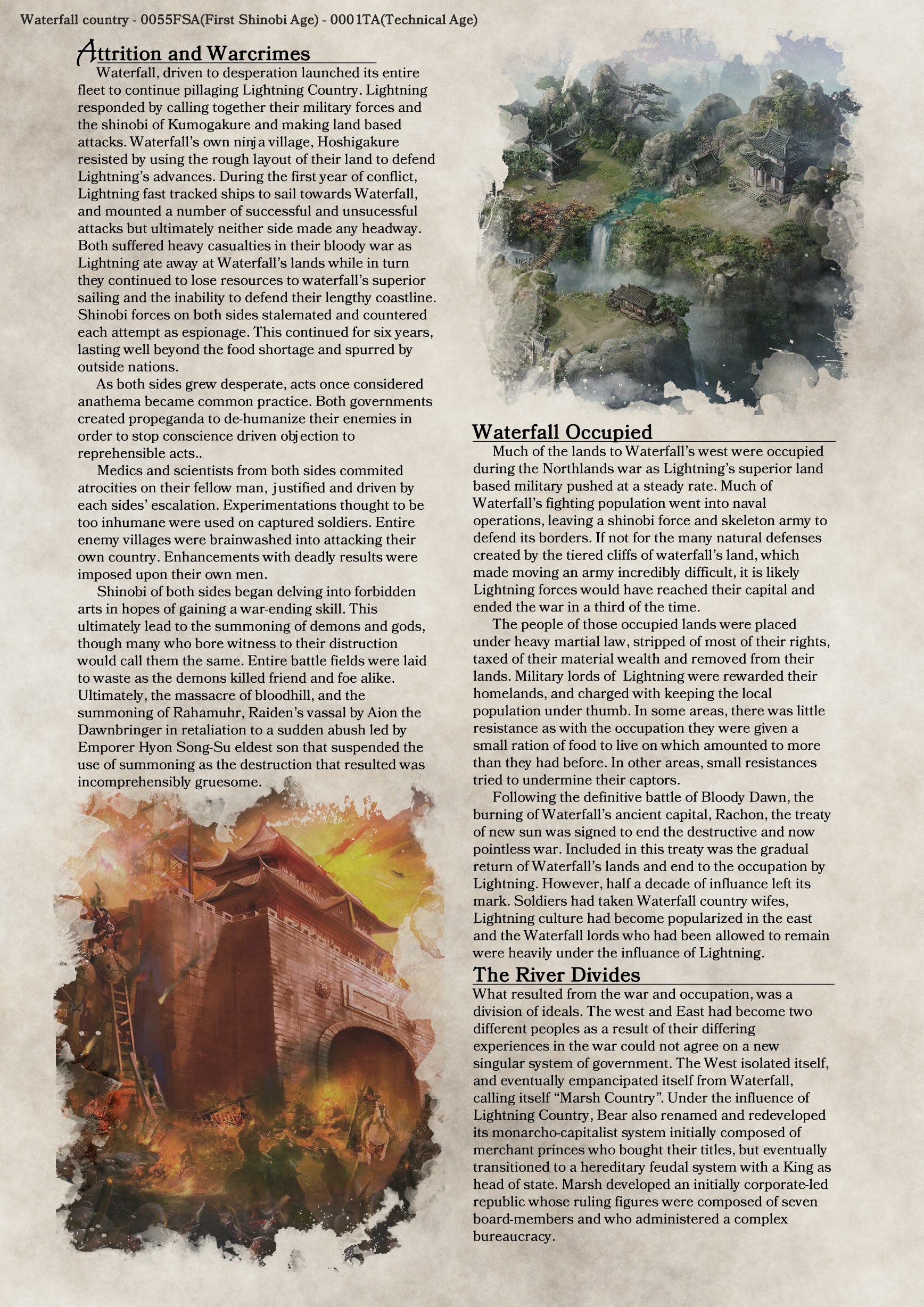 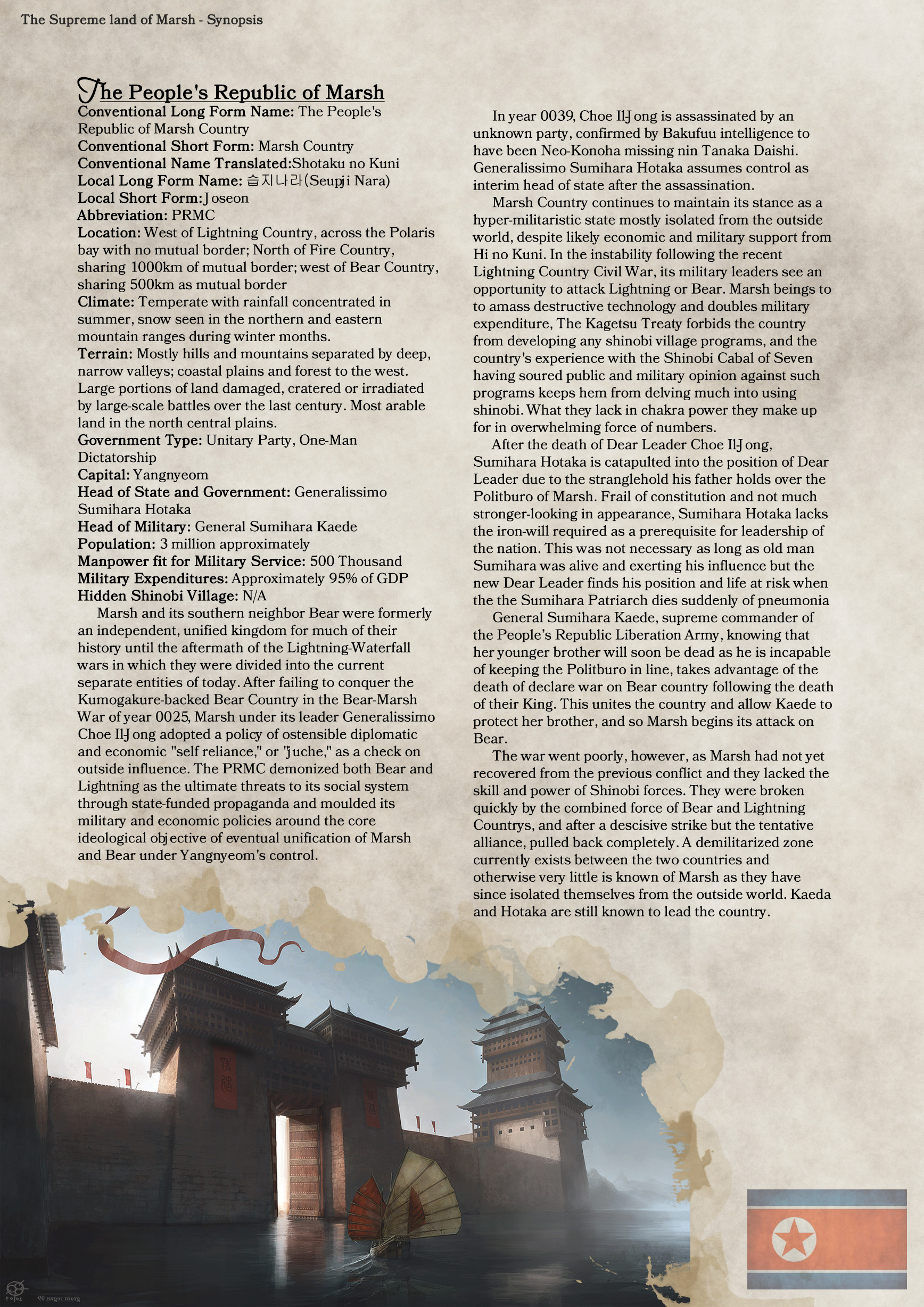 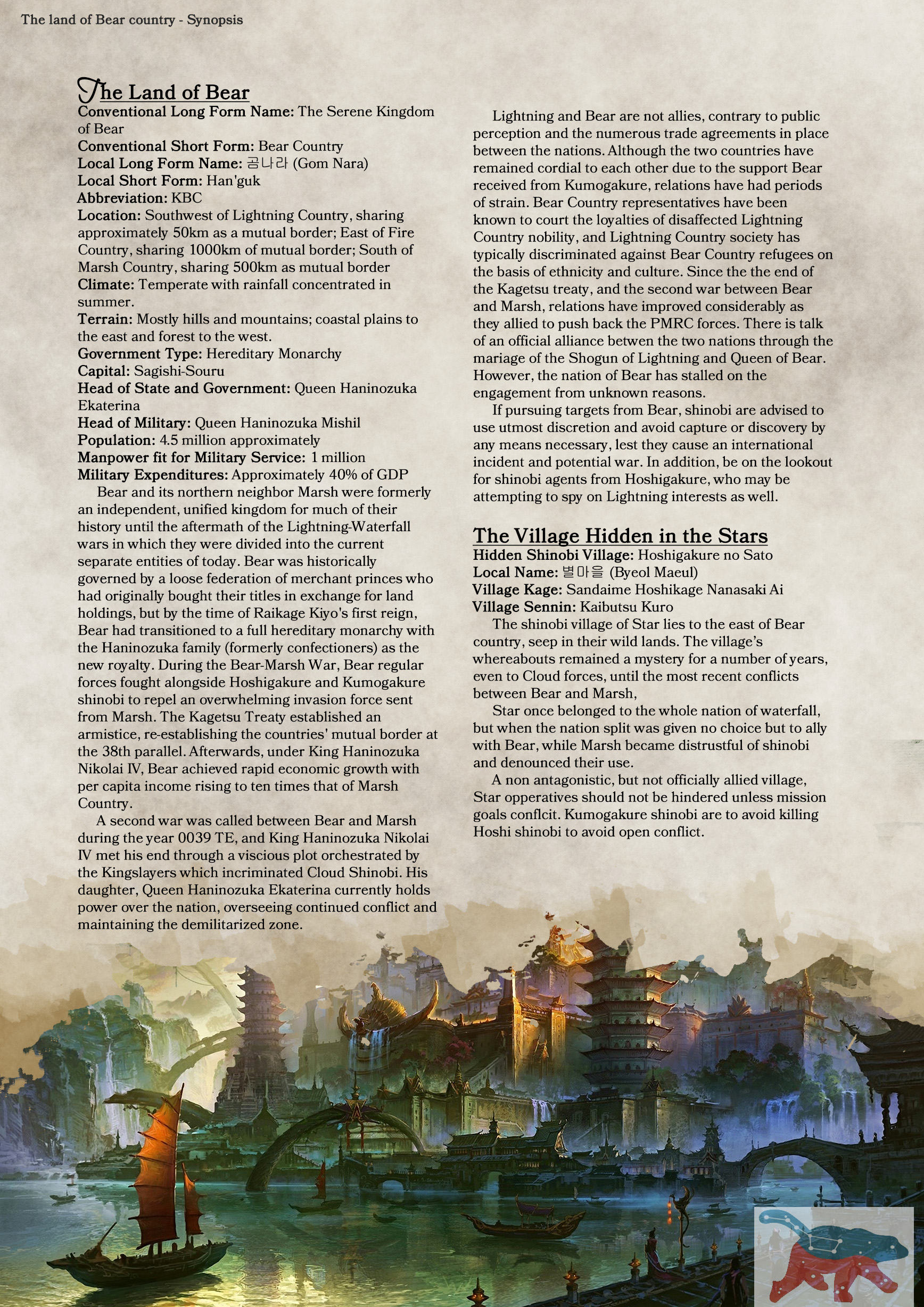 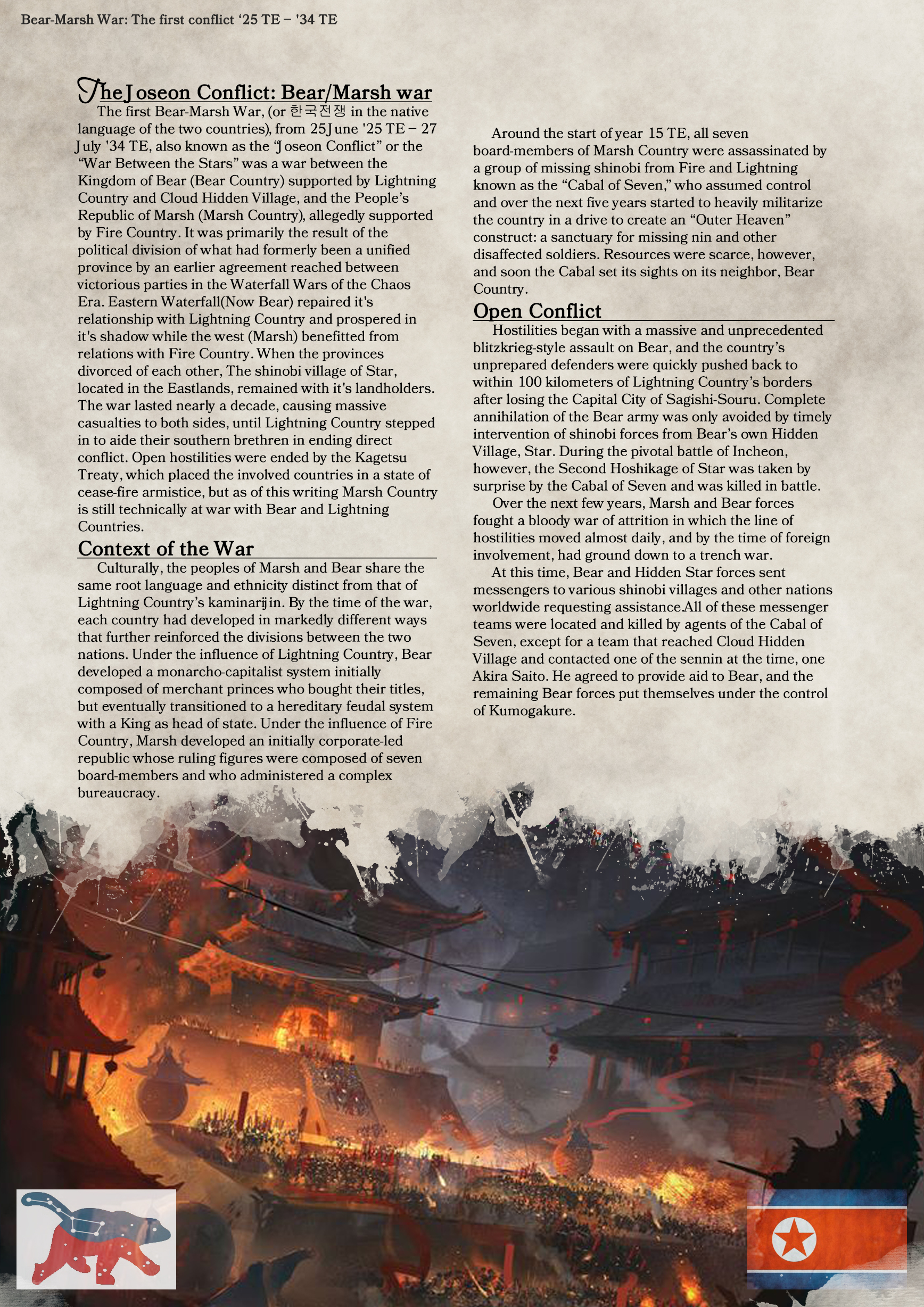 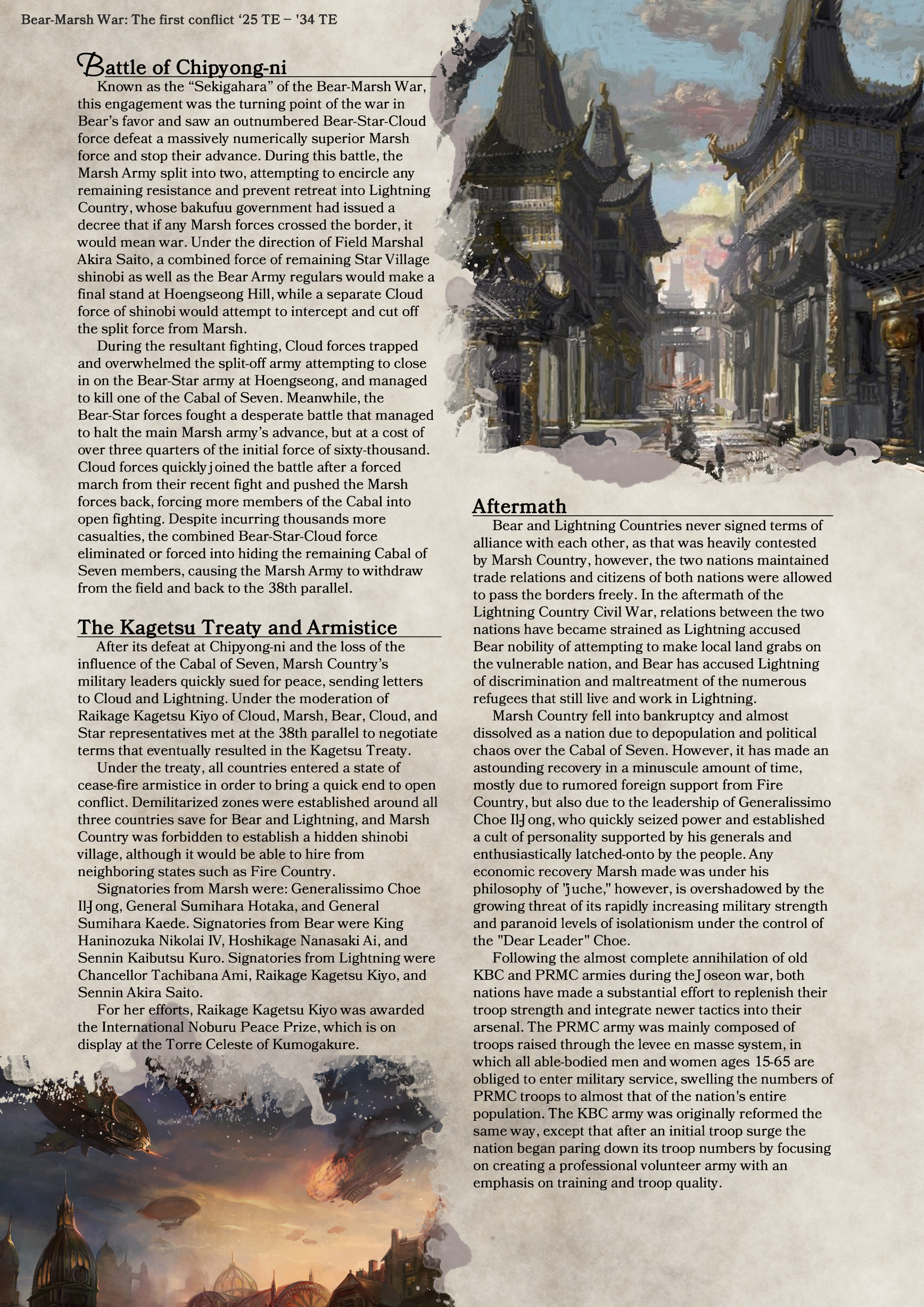 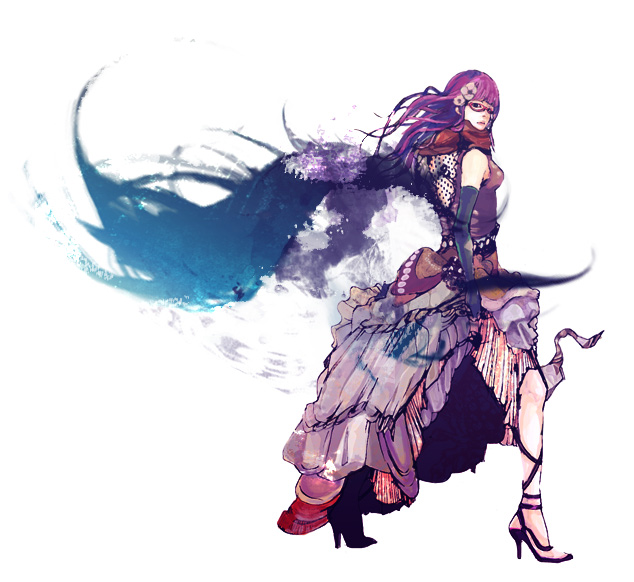 Physical Description:
Yura is notably tall for a woman at about 185cm with an athletic build fitting for a shinobi. Her hair is a lavender hue and just past shoulder length, pulled into a ponytail if and when she sees action. Her bangs, cut straight across, fall to her eyebrows. Behind her typically red spectacles her eyes are a similar color to her hair. She has a smooth, fair complexion though she does have scars from combat which she makes no attempt to hide. She typically wears a neutral expression, never betraying what she is thinking, a practiced talent. Day to day, she does not wear attire one might typically expect from a shinobi, dressing more typically femininely than one might expect from her personality. Yet, this too is an intentional choice meant to lower guards. All the gear and weapons she would ever require are all hidden on her person at all times and she would rip an article of clothing to shreds without a second thought if it meant making it practical for a fight.

Mental Description:
Yura is very level headed and stoic, slow to anger and hard to get a rise out of in general- even a laugh. She is the type to have very few close friends around which she might drop her guard, but for the most part she is very much no-nonsense and that is the face that everybody knows. Her primary concern is for the good of her village and nation and anything else is a distraction. Her ambition, not borne from a want for personal gain, led her to rise through the ranks and catch the eye of the higher ups in the village as well as the royalty of Bear. Those that got to know her realized that she did not seek to elevate herself for glory or praise, but for the good of the village. In regards to Kumogakure, she does not see the village as an ally nor an enemy. She is cautious of them, though less so than of Marsh Country.

History:
Yura was born to two shinobi of Hoshigakure during turbulent times for the village and the country of Bear. A few years after her birth, the war between Bear and Marsh broke out and both of her parents were sent off to fight on the front lines in the initial assault by Marsh. Before Lightning Country became involved in the war, Bear was fighting a losing battle and being pushed back. Yura’s mother was killed in one of the many battles between the two nations. Just months later, Kumogakure sided with Hoshigakure and pushed back against the invading forces. A year later, the Kagetsu treaty was signed, ending the war.

Yura was just one of many that lost a loved one in the war, but that was no comfort. Her father returned from the war and the loss of his wife with an understandably darker outlook on life. Still, he did his best in raising Yura alone and did a fine job of it given the circumstances. Wanting the best for his daughter, he taught her to be a dignified and respectable shinobi. During her academy days he gave her supplemental training daily and her performance in classes reflected as much. She easily graduated the academy, though with all of her extra training she had little time to make friends.Rising through the ranks, her trend of excelling professionally while mostly ignoring any semblance of a personal life continued. She was respected by those that she worked with, though none would claim to be more than colleagues with her per say. None could deny that she earned her place in the village as she rose to the top. Before she hit 20 years of age, she had become a Jounin who had the ear of even the Hoshikage.

When the King of Bear country was assassinated by the Kingslayers and the blame placed at the feet of Cloud shinobi, Yura called for calm when others were crying for war. She hadn’t any particular love for Kumogakure (her father placed some of the blame for their mother’s death on Kumogakure’s hesitance to get involved) but she did not hate them. Most importantly, she recognized that it made no sense for Cloud shinobi to do such a thing and that an outbreak of another war would lead to more children losing their parents and vice versa. Fortunately, the war was averted.

Recognizing Yura’s level mind and potential, the village placed Yura as a personal guard for the Hoshikage. This also doubled as an unofficial advisory role to the Hoshikage which after a few years turned official. Yura served in the role for many years during which she came to respect the Hoshikage and her leadership. Her main grievance, and a point of contention between the two women, was the Hoshikage’s relationship with a certain Lightning Country noble of which Yura did not approve. She saw the relationship as a conflict of interest, yet could not deter the Hoshikage from the choices she made in her personal life.

Eventually, calls were made for the Sandaime Hoshikage to retire, due in part to the controversy finally catching up. Eventually, the choice was made for her. By this time, Yura was seen as a natural successor having spent many years under the tutelage of the Sandaime. When the offer was made, she readily accepted and has since been leading the village down a steady path. As it always has been, her main focus is on the well being of her village and the country. Other nations such as Marsh or Lightning always come second to her, though she is perfectly content to maintain positive relations with them.
You must log in or register to reply here.
Share:
Twitter Reddit Tumblr WhatsApp Email Link
Top Bottom