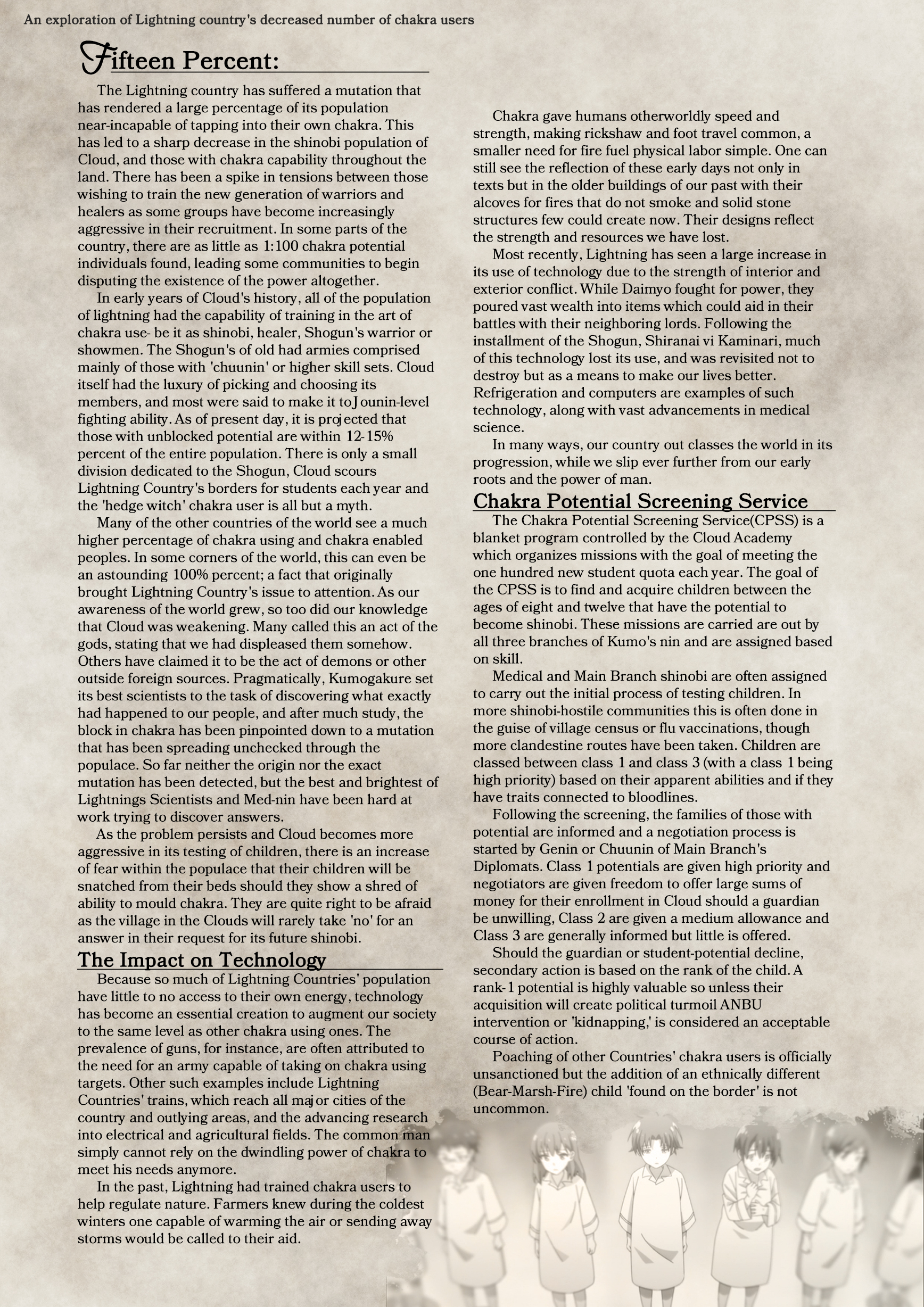 The Lightning country has suffered a mutation that has rendered a large percentage of its population near-incapable of tapping into their own chakra. This has led to a sharp decrease in the shinobi population of Cloud, and those with chakra capability throughout the land. There has been a spike in tensions between those wishing to train the new generation of warriors and healers as some groups have become increasingly aggressive in their recruitment. In some parts of the country, there are as little as 1:100 chakra potential individuals found, leading some communities to begin disputing the existence of the power altogether.

In early years of Cloud's history, all of the population of lightning had the capability of training in the art of chakra use- be it as shinobi, healer, Shogun's warrior or showmen. The Shogun's of old had armies comprised mainly of those with 'chuunin' or higher skill sets. Cloud itself had the luxury of picking and choosing its members, and most were said to make it to Jounin-level fighting ability. As of present day, it is projected that those with unblocked potential are within 12-15% percent of the entire population. There is only a small division dedicated to the Shogun, Cloud scours Lightning Country's borders for students each year and the 'hedge witch' chakra user is all but a myth.

Many of the other countries of the world see a much higher percentage of chakra using and chakra enabled peoples. In some corners of the world, this can even be an astounding 100% percent; a fact that originally brought Lightning Country's issue to attention. As our awareness of the world grew, so too did our knowledge that Cloud was weakening. Many called this an act of the gods, stating that we had displeased them somehow. Others have claimed it to be the act of demons or other outside foreign sources. Pragmatically, Kumogakure set its best scientists to the task of discovering what exactly had happened to our people, and after much study, the block in chakra has been pinpointed down to a mutation that has been spreading unchecked through the populace. So far neither the origin nor the exact mutation has been detected, but the best and brightest of Lightnings Scientists and Med-nin have been hard at work trying to discover answers.

As the problem persists and Cloud becomes more aggressive in its testing of children, there is an increase of fear within the populace that their children will be snatched from their beds should they show a shred of ability to mould chakra. They are quite right to be afraid as the village in the Clouds will rarely take 'no' for an answer in their request for its future shinobi.

The Impact on Technology:

Because so much of Lightning Countries' population have little to no access to their own energy, technology has become an essential creation to augment our society to the same level as other chakra using ones. The prevalence of guns, for instance, are often attributed to the need for an army capable of taking on chakra using targets. Other such examples include Lightning Countries' trains, which reach all major cities of the country and outlying areas, and the advancing research into electrical and agricultural fields. The common man simply cannot rely on the dwindling power of chakra to meet his needs anymore.

In the past, Lightning had trained chakra users to help regulate nature. Farmers knew during the coldest winters one capable of warming the air or sending away storms would be called to their aid. Chakra gave humans otherworldly speed and strength, making rickshaw and foot travel common, a smaller need for fire fuel physical labor simple. One can still see the reflection of these early days not only in texts but in the older buildings of our past with their alcoves for fires that do not smoke and solid stone structures few could create now. Their designs reflect the strength and resources we have lost.

Most recently, Lightning has seen a large increase in its use of technology due to the strength of interior and exterior conflict. While Daimyo fought for power, they poured vast wealth into items which could aid in their battles with their neighboring lords. Following the installment of the Shogun, Shiranai vi Kaminari, much of this technology lost its use, and was revisited not to destroy but as a means to make our lives better. Refrigeration and computers are examples of such technology, along with vast advancements in medical science.

In many ways, our country out classes the world in its progression, while we slip ever further from our early roots and the power of man.

The Chakra Potential Screening Service(CPSS) is a blanket program controlled by the Cloud Academy which organizes missions with the goal of meeting the one hundred new student quota each year. The goal of the CPSS is to find and acquire children between the ages of eight and twelve that have the potential to become shinobi. These missions are carried are out by all three branches of Kumo's nin and are assigned based on skill.

Medical and Main Branch shinobi are often assigned to carry out the initial process of testing children. In more shinobi-hostile communities this is often done in the guise of village census or flu vaccinations, though more clandestine routes have been taken. Children are classed between class 1 and class 3 (with a class 1 being high priority) based on their apparent abilities and if they have traits connected to bloodlines.

Following the screening, the families of those with potential are informed and a negotiation process is started by Genin or Chuunin of Main Branch's Diplomats. Class 1 potentials are given high priority and negotiators are given freedom to offer large sums of money for their enrollment in Cloud should a guardian be unwilling, Class 2 are given a medium allowance and Class 3 are generally informed but little is offered.

Should the guardian or student-potential decline, secondary action is based on the rank of the child. A rank-1 potential is highly valuable so unless their acquisition will create political turmoil ANBU intervention or 'kidnapping,' is considered an acceptable course of action.

Poaching of other Countries' chakra users is officially unsanctioned but the addition of an ethnically different (Bear-Marsh-Fire) child 'found on the border' is not uncommon.
You must log in or register to reply here.
Share:
Twitter Reddit Tumblr WhatsApp Email Link
Top Bottom