How to Read? [Open] [Learning Fuego]

Arisato realized how ridiculous it was for a fire country native that had a firm handle on the language while speaking whilst knowing the basics of the other countries languages, and some of the basics of their written languages too, but not his own because his damned globetrotting thieving father never bothered to teach him how with him constantly saying things like "You don't need to be able to read how much something is word, and nothing else really matters" or "Reading simply slows you down and that's what gets you caught", and Arisato bought into it wholeheartedly and now he was stuck in a library of the one village that were able to catch to him and his Dad, well catch up to him since his father had ran without even leaving Arisato a word of warning.

Just thinking back on how stupid he had been to continue to believe in his father even years after being abandoned by him, and being stuff in an orphanage with absurdly uptight matrons that essentially ignored his every need save for anything taht was an absolute necessity for him, like food and water, but not an education apparently. Even though they knew he'd be forced into the academy, it's what kept the ex-thief out of jail,where he'd have to read a written language he knew practically nothing of. So to remedy that he's been trying to break past it for a long while now with little successes sprinkled throughout the experience, and he was well on his way to be able to read second year material despite being thirteen.

His method of learning to was individually learning the words in the single sentence of a children's book, which tended to have shorter sentences and pictures, and then attempt to understand what the words mean by saying it aloud to himself, since he could speak it and knew how to speak properly he just didn't understand what any of the characters in the writing meant, until he felt his cobalt blue eyes drift off into boredom as he grew tempted to just stand in a mirror and analyze why his jet black tousled neck length hair would only naturally coverthe right side of the upper part of his face instead of the entirety of it whenever he took of his slim red headband that held back a nest that a bird would kill for.

Realizing that his thoughts were beginning to stray he set down the book "Animals and their Colors perfect for your special little readers", before he began to cover his eyes with his right palm before letting out a groan of frustration out of not being able to read half of a sentence that described what color a pig was, and that he only had a clue what it meant because of the pictures. After taking a few moments of him blearily staring at the pale complexion of his hand in an attempt to keep the stupid words away.

He felt the desire to just curl up in his black hoodie pull up his hoodie zip it all the way up, instead of his usual halfway up, to cover his red undershirt, and stuff his hands into his black jeans with the blue trim's pockets and just stare at his dark blue converse so that he'd have some semblance of protection from the heat after having lit a million copies of this stupid book aflame with the author as the kindling. Ugh he shouldn't have stayed up so late practicing his calligraphy now he was irritated with the mere thought of words.

'Oh by some divine deity's gracious will please send me someone that can actually read' he jokingly prayed to himself in his head before resignation took over him once more as he prepared his eyes to cause the pig's cartoony mocking empty smile that had been taunting him for the last half hour, and his friends that had put him through similar pain, to be set aflame.
T 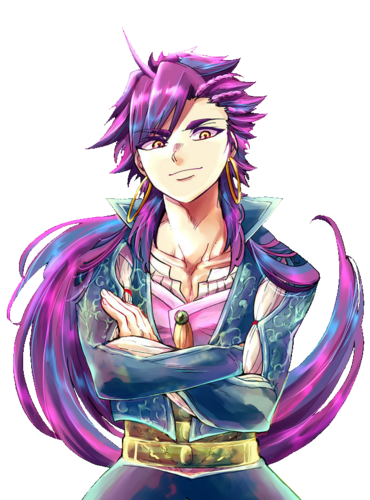 Akihiko had just arrived back home yesterday. He stayed at his parent's place, big mistake, so one of his first goals was to get his own place in town. They pestered him about all sorts of things, they didn't want him to have anything to do with being a shinobi, but his problem wasn't them. It was his older brothers,Ichiro, every time he even say him his blood bioled. Maybe it was the way they talked, and acted. They used to pick on Akihiko, and beat him up back when he couldn't fight back. Only thing keeping Akihiko from picking a fight was his mother, she had enough to deal with, 14 children in the house was quite a task. Given some were techinically adults, but they still lived there. Akihiko didn't want to cause more of a problem. He missed the quiet hotels he had slept in on his travels, soon, he'd have his own place though.

Akihiko was a 17 year old guy that stood at 6'1'', with long purple hair. His clothing looked somewhat foriegn. His last destination was Kumo, so he had clothing from that area. He had a Konoha headband on his right arm, showing he was indeed a shinobi from this village.

Akihiko was carrying several books with him, copies of his medical research journals. He put them on the counter, and called over the Librian. "Hello there, I would like to donate some copies of my medical research journals. They're on bloodlines, from all over the main villages." He explained, he had never donated books before, so he wasn't sure how to do it. The Librian nodded, and handed him a forum to fill out. He did so, and gave it back to her, she then took the small stack, and taped theforum on them. she then placed them on a shelf behind the counter and told Akihiko to have a good day.

Akihiko Took a few steps away from the counter and sighed. He hoped to see those books in the library. He hadn't been here since he was mearly a student, studying for an MiT exam. He looked around and noticed a younger boy, who seemed frustraited. He grinned and walked over to the boy. He saw that he was reading.... A baby book? AT least Akihiko thought they were. Boys his age are usually reading more mature things by now, right? Has konoha fallen that far behind while he was away? "I used to read that book to my baby sister." Akihiko spoke out loud to the boy, and pointed to the book.
A

Arisato jumped in his seat slightly at the sound of someone speaking to him as he contemplated the destruction of a children's book series before he laughed awkwardly before his mind raced for a decent enough distraction for him to put on since it was always embarrassing whenever someone found out that he couldn't read at even the average level for his age. He felt a lightbulb go off in his head which he was sure would show in his eyes and face, but at this point it could only help him.

His face lit up and his eyes gained an excited shine to them, coinciding with his idea's conception, his voice gained a bit of excitement in it as he held up the, evil, book with his right while he held it open with his left index finger with it that also was placed on a line that had been troubling him before the stranger had come up to him. His voice had a slight whine to it since he was genuinely irritated at the fact that he couldn't read the stupid book. "Could you please please please tell what these words mean?" He had to resist at blinking at the slight desperation that he had heard in his voice. 'Wow didn't realize I was that desperate for some help...' As that thought went through his mind Arisato wondered how desperate he should make himself. He could for the puppy dog eyes, and while he did look younger than thirteen he didn't look that young. Eventually he resigned himself to staying at juuust this level of desperate since anymore would be pushing it in believability.
You must log in or register to reply here.
Share:
Twitter Reddit Tumblr WhatsApp Email Link
Top Bottom