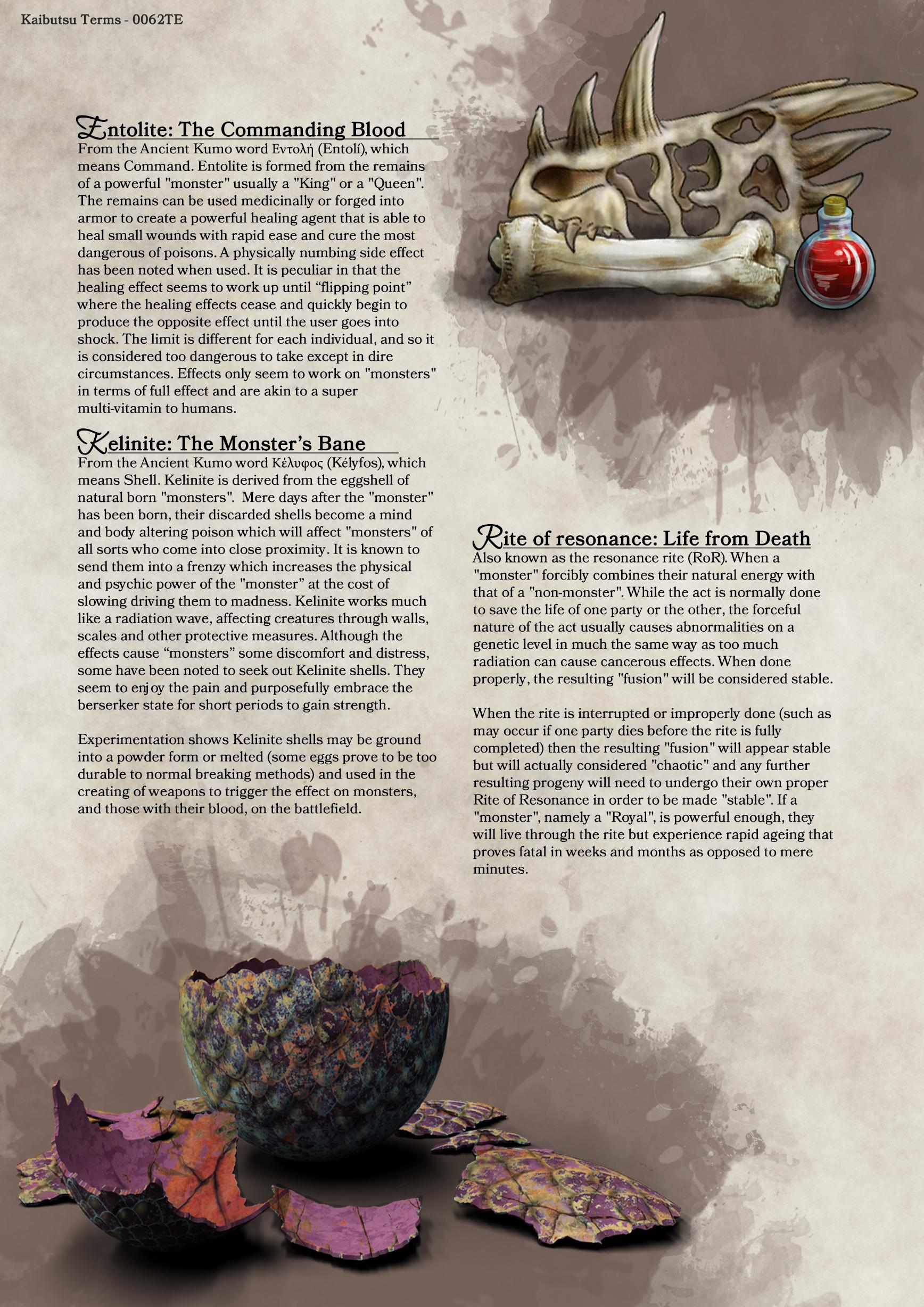 Entolite: The Commanding Blood
From the Ancient Kumo word Εντολή (Entolí), which means Command. Entolite is formed from the remains of a powerful "monster" usually a "King" or a "Queen". The remains can be used medicinally or forged into armor to create a powerful healing agent that is able to heal small wounds with rapid ease and cure the most dangerous of poisons. A physically numbing side effect has been noted when used.
It is peculiar in that the healing effect seems to work up until "flipping point" where the healing effects cease and quickly begin to produce the opposite effect until the user goes into shock. The limit is different for each individual, and so it is considered too dangerous to take except in dire circumstances. Effects only seem to work on "monsters" in terms of full effect and are akin to a super multi-vitamin to humans.

Kelinite: The Monster's Bane
From the Ancient Kumo word Κέλυφος (Kélyfos), which means Shell. Kelinite is derived from the eggshell of natural born "monsters". Mere days after the "monster" has been born, their discarded shells become a mind and body altering poison which will affect "monsters" of all sorts who come into close proximity. It is known to send them into a frenzy which increases the physical and psychic power of the "monster" at the cost of slowing driving them to madness. Kelinite works much like a radiation wave, affecting creatures through walls, scales and other protective measures.
Although the effects cause "monsters" some discomfort and distress, some have been noted to seek out Kelinite shells. They seem to erg oy the pain and purposefully embrace the berserker state for short periods to gain strength.
Experimentation shows Kelinite shells may be ground into a powder form or melted (some eggs prove to be too durable to normal breaking methods) and used in the creating of weapons to trigger the effect on monsters, and those with their blood, on the battlefield.

Rite of resonance: Life from Death
Also known as the resonance rite (RoR). When a "monster" forcibly combines their natural energy with that of a "non-monster". While the act is normally done to save the life of one party or the other, the forceful nature of the act usually causes abnormalities on a genetic level in much the same way as too much radiation can cause cancerous effects. When done properly, the resulting "fusion" will be considered stable.
When the rite is interrupted or improperly done (such as may occur if one party dies before the rite is fully completed) then the resulting "fusion" will appear stable but will actually considered "chaotic" and any further resulting progeny will need to undergo their own proper Rite of Resonance in order to be made "stable". If a "monster", namely a "Royal", is powerful enough, they will live through the rite but experience rapid ageing that proves fatal in weeks and months as opposed to mere minutes.
C 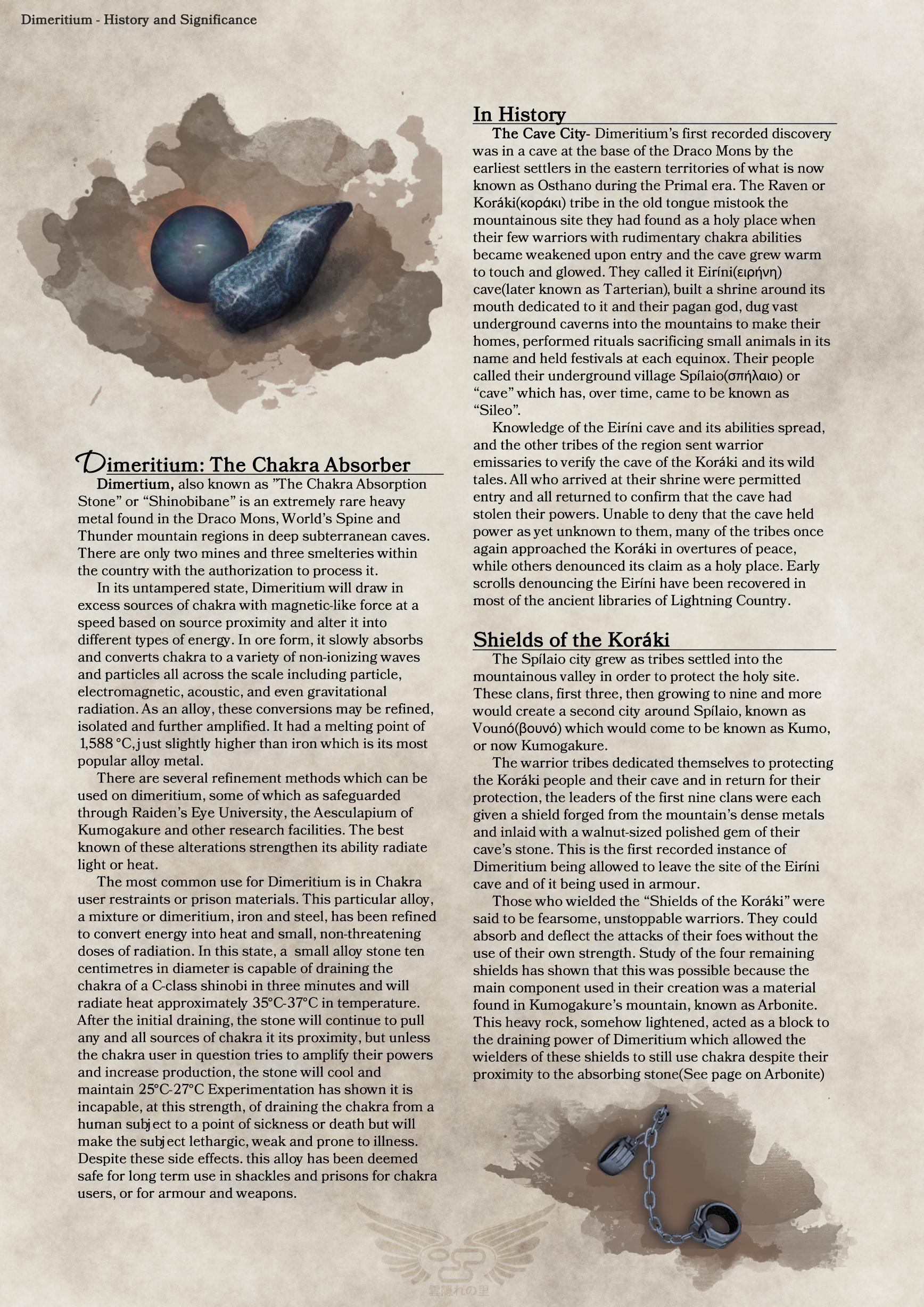 Dimertium, also known as ”The Chakra Absorption Stone” or “Shinobibane” is an extremely rare heavy metal found in the Draco Mons, World’s Spine and Thunder mountain regions in deep subterranean caves. There are only two mines and three smelteries within the country with the authorization to process it.

In its untampered state, Dimeritium will draw in excess sources of chakra with magnetic-like force at a speed based on source proximity and alter it into different types of energy. In ore form, it slowly absorbs and converts chakra to a variety of non-ionizing waves and particles all across the scale including particle, electromagnetic, acoustic, and even gravitational radiation. As an alloy, these conversions may be refined, isolated and further amplified. It had a melting point of 1,588 °C, just slightly higher than iron which is its most popular alloy metal.

There are several refinement methods which can be used on dimeritium, some of which as safeguarded through Raiden’s Eye University, the Aesculapium of Kumogakure and other research facilities. The best known of these alterations strengthen its ability radiate light or heat.

The most common use for Dimeritium is in Chakra user restraints or prison materials. This particular alloy, a mixture or dimeritium, iron and steel, has been refined to convert energy into heat and small, non-threatening doses of radiation. In this state, a small alloy stone ten centimetres in diameter is capable of draining the chakra of a C-class shinobi in three minutes and will radiate heat approximately 35°C-37°C in temperature. After the initial draining, the stone will continue to pull any and all sources of chakra it its proximity, but unless the chakra user in question tries to amplify their powers and increase production, the stone will cool and maintain 25°C-27°C Experimentation has shown it is incapable, at this strength, of draining the chakra from a human subject to a point of sickness or death but will make the subject lethargic, weak and prone to illness. Despite these side effects. this alloy has been deemed safe for long term use in shackles and prisons for chakra users, or for armour and weapons.

In History
The Cave City- Dimeritium’s first recorded discovery was in a cave at the base of the Draco Mons by the earliest settlers in the eastern territories of what is now known as Osthano during the Primal era. The Raven or Koráki(κοράκι) tribe in the old tongue mistook the mountainous site they had found as a holy place when their few warriors with rudimentary chakra abilities became weakened upon entry and the cave grew warm to touch and glowed. They called it Eiríni(ειρήνη) cave(later known as Tarterian), built a shrine around its mouth dedicated to it and their pagan god, dug vast underground caverns into the mountains to make their homes, performed rituals sacrificing small animals in its name and held festivals at each equinox. Their people called their underground village Spílaio(σπήλαιο) or “cave” which has, over time, came to be known as “Sileo”.

Knowledge of the Eiríni cave and its abilities spread, and the other tribes of the region sent warrior emissaries to verify the cave of the Koráki and its wild tales. All who arrived at their shrine were permitted entry and all returned to confirm that the cave had stolen their powers. Unable to deny that the cave held power as yet unknown to them, many of the tribes once again approached the Koráki in overtures of peace, while others denounced its claim as a holy place. Early scrolls denouncing the Eiríni have been recovered in most of the ancient libraries of Lightning Country.

Shields of the Koráki
The Spílaio city grew as tribes settled into the mountainous valley in order to protect the holy site. These clans, first three, then growing to nine and more would create a second city around Spílaio, known as Vounó(βουνό) which would come to be known as Kumo, or now Kumogakure.

The warrior tribes dedicated themselves to protecting the Koráki people and their cave and in return for their protection, the leaders of the first nine clans were each given a shield forged from the mountain’s dense metals and inlaid with a walnut-sized polished gem of their cave’s stone. This is the first recorded instance of Dimeritium being allowed to leave the site of the Eiríni cave and of it being used in armour.

Those who wielded the “Shields of the Koráki” were said to be fearsome, unstoppable warriors. They could absorb and deflect the attacks of their foes without the use of their own strength. Study of the four remaining shields has shown that this was possible because the main component used in their creation was a material found in Kumogakure’s mountain, known as Arbonite. This heavy rock, somehow lightened, acted as a block to the draining power of Dimeritium which allowed the wielders of these shields to still use chakra despite their proximity to the absorbing stone(See page on Arbonite)
C 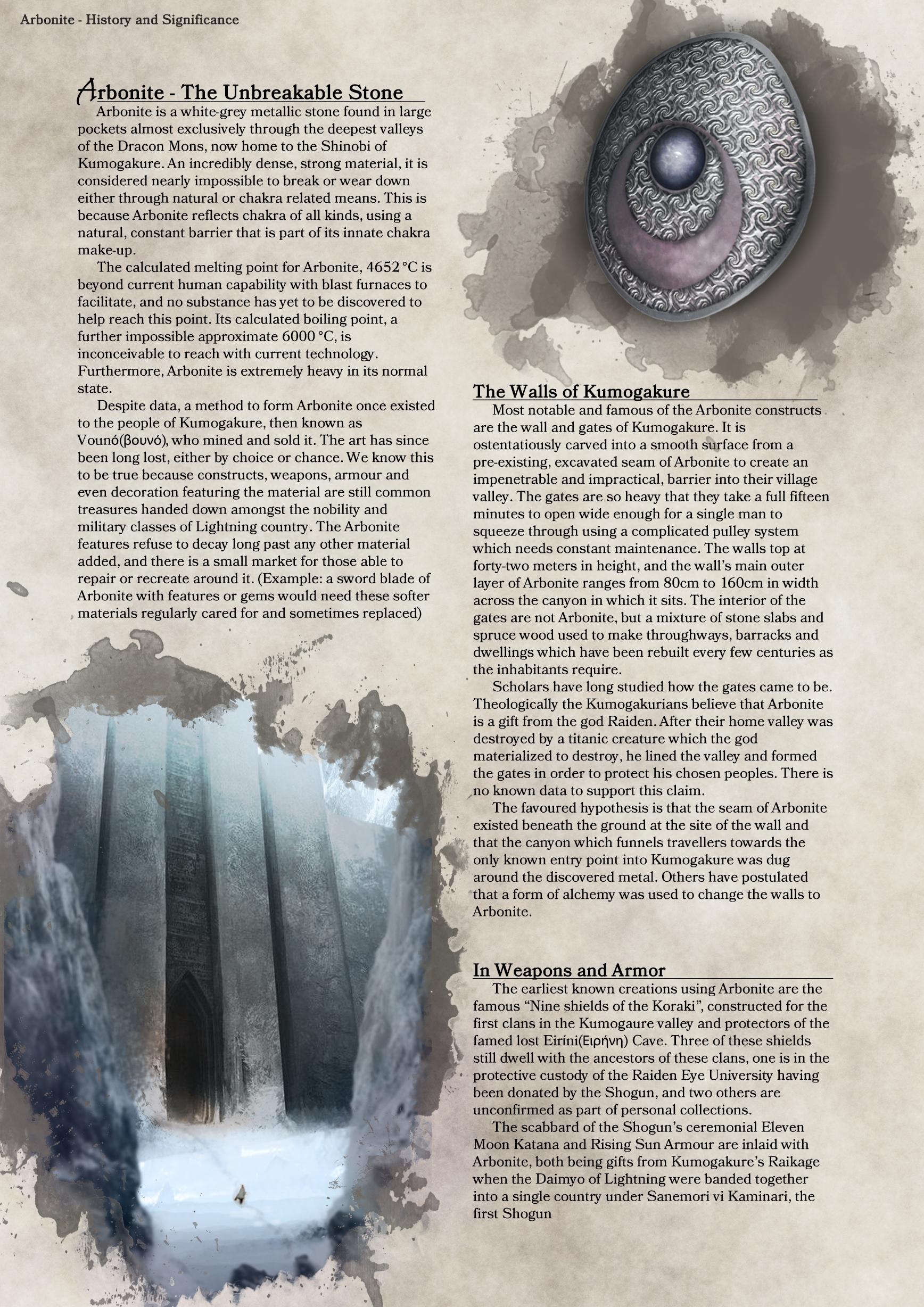 Arbonite is a white-grey metallic stone found in large pockets almost exclusively through the deepest valleys of the Dracon Mons, now home to the Shinobi of Kumogakure. An incredibly dense, strong material, it is considered nearly impossible to break or wear down either through natural or chakra related means. This is because Arbonite reflects chakra of all kinds, using a natural, constant barrier that is part of its innate chakra make-up.

The calculated melting point for Arbonite, 4652 °C is beyond current human capability with blast furnaces to facilitate, and no substance has yet to be discovered to help reach this point. Its calculated boiling point, a further impossible approximate 6000 °C, is inconceivable to reach with current technology. Furthermore, Arbonite is extremely heavy in its normal state.

Despite data, a method to form Arbonite once existed to the people of Kumogakure, then known as Vounó(βουνό), who mined and sold it. The art has since been long lost, either by choice or chance. We know this to be true because constructs, weapons, armour and even decoration featuring the material are still common treasures handed down amongst the nobility and military classes of Lightning country. The Arbonite features refuse to decay long past any other material added, and there is a small market for those able to repair or recreate around it. (Example: a sword blade of Arbonite with features or gems would need these softer materials regularly cared for and sometimes replaced)

The Walls of Kumogakure
Most notable and famous of the Arbonite constructs are the wall and gates of Kumogakure. It is ostentatiously carved into a smooth surface from a pre-existing, excavated seam of Arbonite to create an impenetrable and impractical, barrier into their village valley. The gates are so heavy that they take a full fifteen minutes to open wide enough for a single man to squeeze through using a complicated pulley system which needs constant maintenance. The walls top at forty-two meters in height, and the wall’s main outer layer of Arbonite ranges from 80cm to 160cm in width across the canyon in which it sits. The interior of the gates are not Arbonite, but a mixture of stone slabs and spruce wood used to make throughways, barracks and dwellings which have been rebuilt every few centuries as the inhabitants require.

Scholars have long studied how the gates came to be. Theologically the Kumogakurians believe that Arbonite is a gift from the god Raiden. After their home valley was destroyed by a titanic creature which the god materialized to destroy, he lined the valley and formed the gates in order to protect his chosen peoples. There is no known data to support this claim.

The favoured hypothesis is that the seam of Arbonite existed beneath the ground at the site of the wall and that the canyon which funnels travellers towards the only known entry point into Kumogakure was dug around the discovered metal. Others have postulated that a form of alchemy was used to change the walls to Arbonite.

In Weapons and Armor:
The earliest known creations using Arbonite are the famous “Nine shields of the Koraki”, constructed for the first clans in the Kumogaure valley and protectors of the famed lost Eiríni(Ειρήνη) Cave. Three of these shields still dwell with the ancestors of these clans, one is in the protective custody of the Raiden Eye University having been donated by the Shogun, and two others are unconfirmed as part of personal collections.

The scabbard of the Shogun’s ceremonial Eleven Moon Katana and Rising Sun Armour are inlaid with Arbonite, both being gifts from Kumogakure’s Raikage when the Daimyo of Lightning were banded together into a single country under Sanemori vi Kaminari, the first Shogun
You must log in or register to reply here.
Share:
Twitter Reddit Tumblr WhatsApp Email Link
Top Bottom